The Habits of Greatness

Steve Young and Jerry Rice, two NFL legends, will sit down for an intimate and unmoderated conversation at The Financial Brand Forum 2020 to teach you the habits of greatness.

Don’t miss The Financial Brand Forum — the world’s most elite conference on marketing, CX, data analytics and digital transformation for the banking industry.

The Habits of Greatness: Steve Young and Jerry Rice

By Jeffry Pilcher
CEO/President & Founder of The Financial Brand

Finding a the right people to keynote a conference isn’t easy. The good ones aren’t cheap either.

In fact, speakers appearing on the main stage at The Financial Brand Forum are going to cost just shy of a million dollars this year. The lineup includes Martha Stewart, Jay Leno, Seth Godin, Steve Young with Jerry Rice, and many others from the world’s most respected companies — from Apple and Facebook, to Southwest Airlines and Disney.

Since releasing the Forum 2020 agenda, a few people have asked me, “Why are two football stars speaking at a conference for banking executives?”

The answer is simple. I want everyone attending The Financial Brand Forum going home buzzing with the energy, insights and confidence they need to take their organization to the next level.

In short, I want you to be inspired.

In an industry rocked by disruption, people who work in banking desperately need to see what’s possible. That’s why we look for speakers who will change the way you think and see the world. We want speakers who push bankers outside the relative security of their comfort zone — innovators who break barriers and challenge the status quo.

That means looking outside financial services. Just imagine what pioneers like Steve Jobs, Thomas Edison, Alfred Einstein, and Pablo Picasso might have done had they focused all their attention, intellect and creativity on banking instead of their chosen fields. By studying the characteristics and qualities that define such legendary disruptors, we can teach ourselves the patterns of behavior and habits of thought that drive success. We can figure out how to accomplish our goals with similar passion, relentless focus, and unbending determination. 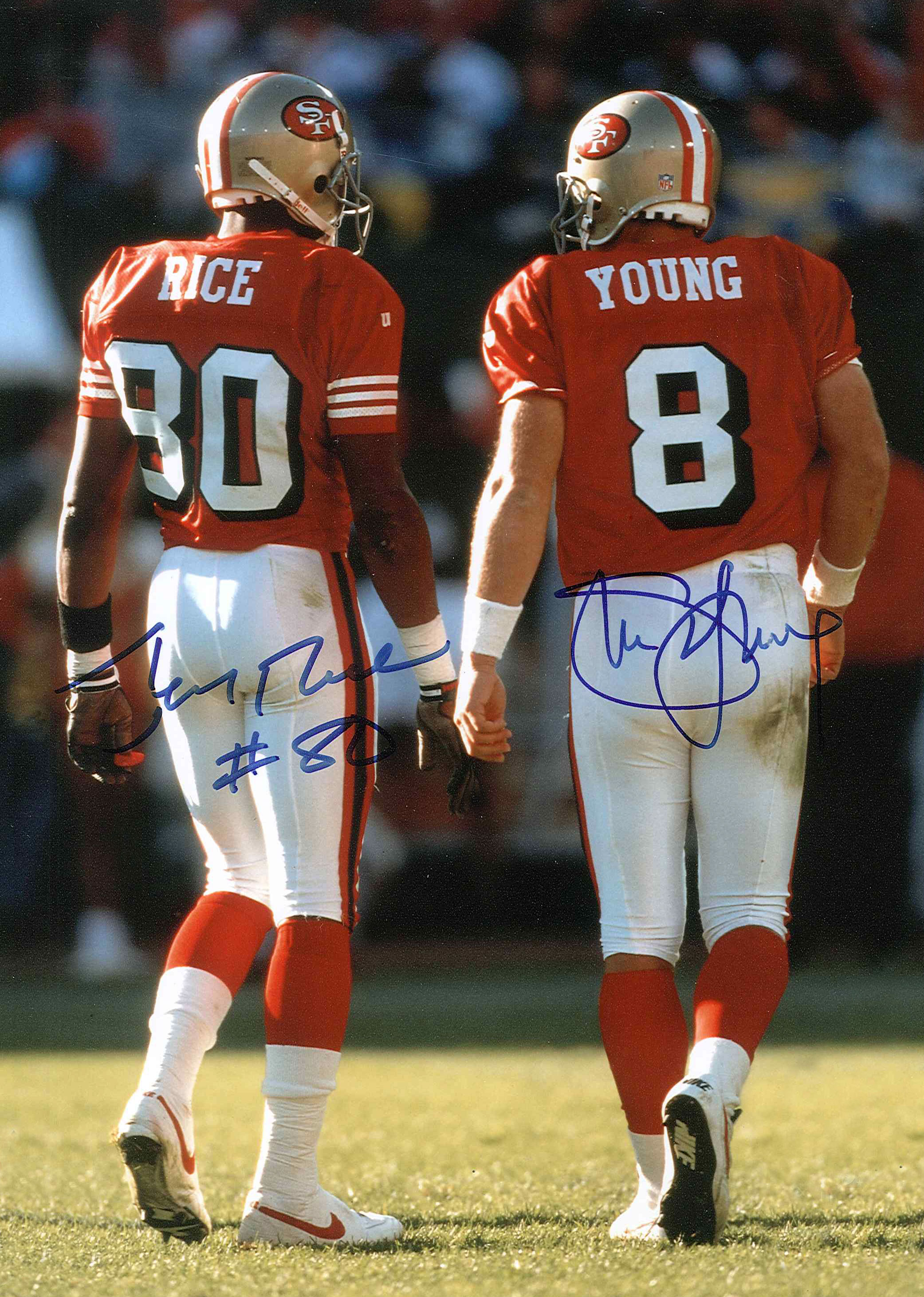 Attendees at the Forum 2020 have the opportunity to sit down with Steve Young and Jerry Rice at a private breakfast, and get exclusive signed memorabilia from the two NFL Super Bowl champions.

Includes video recordings of all keynotes and breakout sessions, and a ticket to see Jay Leno’s private performance opening night!

Jerry Rice holds 36 different NFL records — a record in itself. He is the best wide receiver to ever play in the NFL, and arguably the greatest player of all-time. Rice won three Super Bowls (in 1988, 1989 and 1994). He was selected to the Pro Bowl a record 13 times, won the NFL’s Most Valuable Player Award in 1987, and was the MVP in Super Bowl XXIII. He was enshrined into the Pro Football Hall of Fame in 2010.

His meticulous preparation and work ethic during his 20-year NFL career became legendary.

“He designed his practice to work on his specific needs,” writes Geoff Colvin in his book, Talent is Overrated. “Rice didn’t need to do everything well, just certain things. He had to run precise patterns. He had to evade defenders, out jump them to catch the ball, out muscle them when they tried to strip it away, then outrun tacklers. So he focused his practice work on exactly these requirements.”

When people asked the 49ers’ trainer for details of Rice’s workout, the trainer never released the information out of fear that people would hurt themselves trying to duplicate it.

Rice was not known for his speed, yet achieved greatness in a position where speed is worshiped. It wasn’t talent or genetic good fortune that made him great.

“The lesson that’s easiest to draw from Jerry Rice’s story is that hard work makes all the difference,” notes Colvin.

What does that say about what is important — and what is possible — in banking? How hard do you work in the “off-season” — outside normal business hours — to achieve your goals? Do you attend conferences like The Financial Brand Forum where you can hone and improve your skills? When the buzzer rings and the scoreboard shows the final outcome, will you be able to say you did everything you possibly could to come out on top?

In high school, Jerry Rice used to shut out all the lights in his bedroom, then lay in bed throwing footballs up in the air while it was pitch black. He wanted to teach his hands to find hard-to-catch balls he couldn’t see when obscured by defensive players.

What Do Champions Ask Each Other?

A typical “fireside chat” has a moderator. But the format for this keynote session will be truly unique. With no moderator to get in the way, these two NFL champions will be free to ask questions that only two friends and former teammates would be comfortable asking each other.

Register by February 13th to save $905 and get your free Gold Pass, including video recordings of all sessions and a ticket to see Jay Leno.

In Steve Young’s 15 seasons in NFL, he was named Most Valuable Player twice (in 1992 and 1994), and was the MVP of Super Bowl XXIX. He is one of the highest rated quarterbacks of all-time. He holds the record for career rushing touchdowns among quarterbacks, and is ranked third for rushing yards. His accomplishments landed him in both the College Football Hall of Fame and the Pro Football Hall of Fame.

In the 12 years Young and Rice played together for the San Francisco 49ers, they connected for 85 touchdowns — just under half of the record-setting 197 Rice caught in his career. Each would have been a terrifying player on their own. Together, they were an unstoppable force.

Ironically, Steve Young was told numerous times that he would never play quarterback. But like any true champion (and his teammate Jerry Rice who was told he was “too slow”), he refused to take “no” for an answer.

At BYU, where Young played in college, he would show up early to practice before anyone one else, and stayed long after all the other players left. He analyzed the throwing technique of Jim McMahon, the starting quarterback. He ran grueling drills to improve his athleticism, and threw hour after hour until his arm throbbed.

Somewhere along the way, Young proved to coaches and players alike that he had the determination and the grit that would propel him to become a legendary NFL quarterback.

One day in particular shines a bright spotlight on the work ethic that both Young and Rice exhibited.

After the parade celebrating the 49er’s Super Bowl win in 1995, players cleared out the locker room and the team’s headquarters became a ghost town. The next day, Young, who was single at the time, admitted that he didn’t know what else to do besides “go into the office.”

So the quarterback headed down to the vacant training facility, where he expected to see no one except the lone security officer at the building. But when stepped out onto the practice fields, he saw someone working out.

It was Jerry Rice, running routes by himself.

To Young, the moment was quintessential Rice. “No one else was around,” Young recalls. “Just himself.”

Rice wasn’t doing it to brown-nose coaches or showoff. “Nobody would have known he was down there except him,” Young adds.

That’s what separates people like Young and Rice from everyone else. It boils down to hard work, preparation, dedication, and the millions of decisions — big and little — that you make every day.

Young says he constantly checks himself to make sure his motives, values and actions are always in alignment. “What am I doing?” Young likes to ask himself. “And am I doing it for the purpose that I say and think I am?” 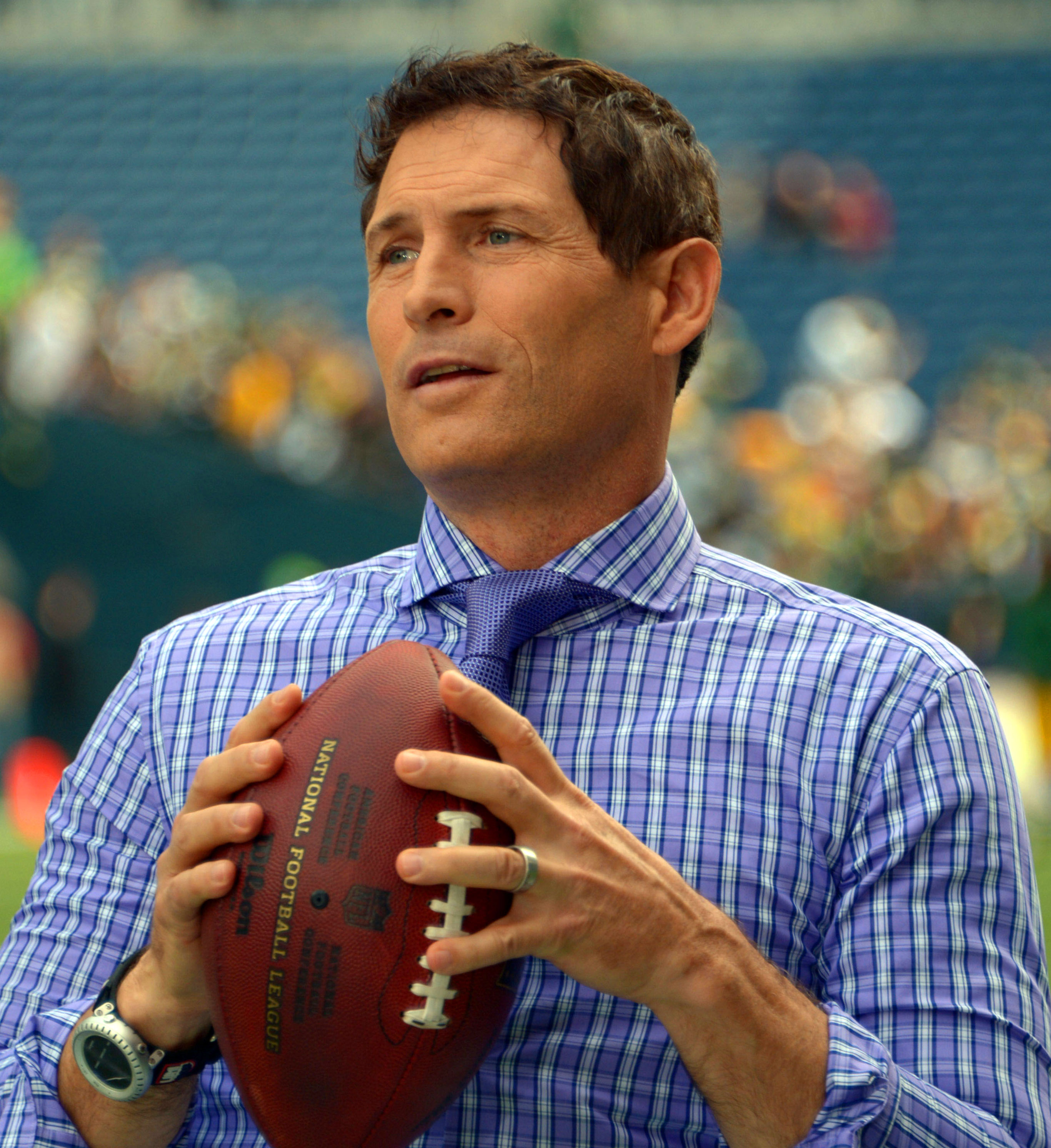 Today Steve Young is a popular sports announcer and hyper-successful partner in HGGC, a private equity firm that he co-founded a decade ago. He specializes in acquiring stakes in companies worth hundreds of millions of dollars, including a number of fintechs.

Register now to save big and get a free upgrade to a Gold Pass, including video recordings of all sessions and a complimentary ticket to see Jay Leno’s private performance exclusively for Forum attendees opening night!